Since 1991, 14 Women’s College alumnae have been named as Fulbright scholars. Notre Dame was recognized by the Institute for International Education, which administers the Fulbright Program, among the U.S. colleges and universities that produced the most Fulbright students for the 2009-2010 academic year.

Follow Lauren McCusker ’12 during her year in South Korea as a Fulbright English Teaching Assistant on her blog.

Read what the media have to say about our amazing Fulbrights! 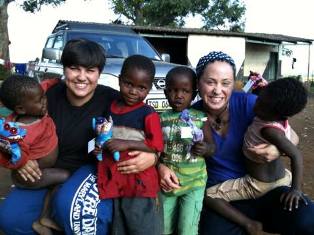 Notre Dame undergraduates have been awarded Davis Projects for Peace grants every year since the program’s inception in 2007. The program is an international initiative to help today’s youth support and encourage peace worldwide. Past recipients have traveled to Ecuador, Kenya , Peru and Swaziland.

In 2013, three Notre Dame students traveled to Swaziland to teach the members of a women's cooperative an income-generating skill.

What could three college students do to help improve the livelihoods of women living in Africa?

That was the vexing question facing Gabrielle Rehmeyer, Andreina Mijares-Cisneros and Amber Brehon as they wrestled with developing a proposal for the Davis Projects for Peace, an initiative that funds grassroots projects anywhere in the world.

They settled on traveling to Swaziland, a small country in southern Africa where Gabrielle lived with her missionary parents before coming to Notre Dame. Her parents had helped organize a women’s cooperative that sewed handicrafts that the members sold for family income, and that co-op offered possibilities.

“We thought about a lot of activities: doing something environmentally friendly, building a soccer field, educating expectant mothers about HIV and AIDS, nutrition,” says Amber. “Eventually, in talking with Gabrielle, we heard about her parents’ sewing project in Swaziland. We couldn’t sew. But two of us could crochet. And we thought, ‘Here is a group of 20 or so women who are already organized. If we could help them learn to crochet, this could only help their business grow.’” 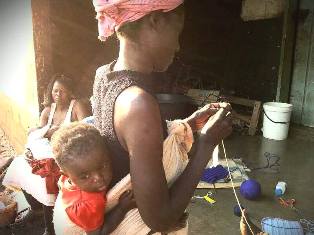 Armed with a $10,000 grant from the Davis Projects for Peace and several suitcases full of colorful yarn, they set off during their summer break for Swaziland, where they spent several weeks teaching women and girls in a community called Section 19 how to crochet scarves, bags and other items that they could sell to boost their income. The money helped these women buy food and medicine—and granted them a measure of independence.“The women have been selling their products to different missionary groups that come through or in the market, and it brings in money for their community,” says Gabrielle. “Where they live there is really no means of employment, even for the men, unless they can get odd jobs here and there picking up scraps from the sugar cane fields. But that pays barely anything.”

“It’s amazing how an idea that just popped into three peoples’ heads could in some way have impacted life for 20 women in Africa,” she says. 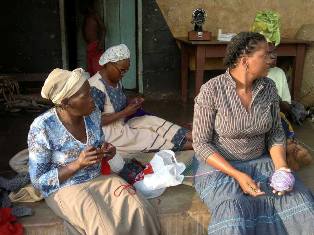 Gabrielle was amazed at how quickly the women picked up the skill. “They were coming up with new ideas when we were there,” she says. “After a few weeks of learning how to crochet, they were making things that even Amber and Andreina had never seen or didn’t know how to do. So they took it and ran with it.”

And Andreina said that although the three Notre Dame students went to Swaziland hoping to help the people there, it was the women of Section 19 who left a lasting impression.

We went there to try and teach a group of women a skill that might help them, and they ended up teaching us more than we ever imagined.

Visit Davis Projects for Peace to learn more about the amazing works of our scholars.