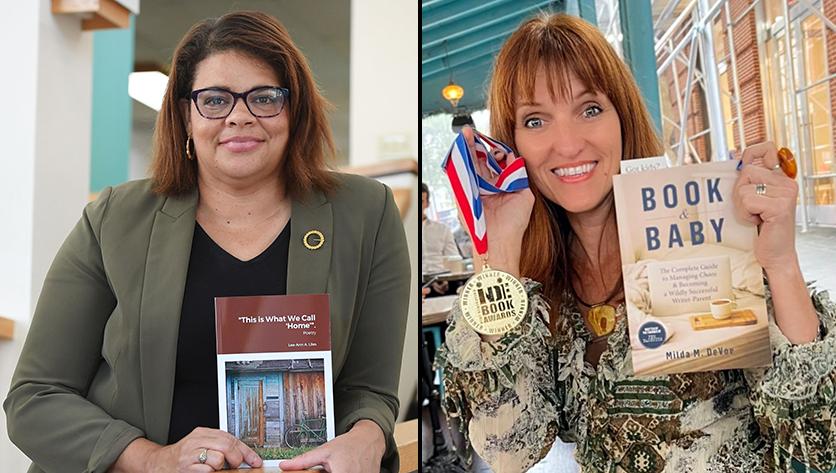 BALTIMORE – One piece was over 30 years in the making, while the other collected 10 years’ worth of advice from fellow authors and parents before its completion.

The two stories, united by the long period of time which passed prior to publication, are also linked in that they were both written by Notre Dame of Maryland alumnae. Lee-Ann Liles ’06 and Milda Motekaitis De Voe ’90 have each received critical acclaim for their efforts.

Liles was recently featured in The Royal Gazette, the only daily newspaper in her home country of Bermuda, after a 30-year wait to publish “This is What We Call Home,” a collection of 64 poems written largely when she was in high school.

The book was originally accepted for publication by a subsidy publisher when Liles was 18 years old, and she decided to finally finish the process after receiving her MFA in creative nonfiction writing last year. Liles has now had three books published, with the first influenced by her time at Notre Dame.

“One of my professors, Mary Elizabeth Pope, was always a mentor for me,” Liles said. “I received the Peggy Miles Award for Tutorial in Writing at Notre Dame, and she worked closely with me on the essay for that which became the title for my first book.”

“Aerie: Short Stories” was published in 2016. Liles, who graduated with a bachelor’s degree in English, remains close with her creative nonfiction writing cohort.

“Many of my top memories at Notre Dame took place on the fifth floor of Gibbons,” she said. “The English department had a room where 8 to 12 of us would meet to go over our writing and just spend time together. It was an awesome experience.”

De Voe’s 2021 novel, “Book and Baby, The Complete Guide to Managing Chaos and Becoming a Wildly Successful Writer-Parent,” won first place in the Writing/Publishing division at the Next Generation Indie Book Awards. She is the founder of Pen Parentis, a 501c3 nonprofit literary organization which supports authors who are also parents.

“Book and Baby is a collection of all the advice and inspiration I received from authors who talked about how they managed to finish writing projects with kids,” De Voe said. “It’s divided into writing with an infant, a little kid, a big kid, all the way up to the empty nest. It’s sub-divided then into money, energy and time, which are the three resources that we’ve identified that writers really struggle with when they have a family.”

De Voe also recently had a short fiction story, “The Scissors of Hope and Despair,” featured in The Baltimore Review’s Winter 2021 edition. Though she graduated with a degree in music, her years at Notre Dame played a key role in her initial transition to writing.

“I took a poetry class in my senior year where we had to write a villanelle for our final project,” she explained. “I submitted my poem in a national college contest I saw advertised on the English department’s bulletin board and ended up winning $1,000. I was so happy, and I think the moment of having national acknowledgement of something I had done helped me see the artistic possibilities of writing.”

De Voe’s villanelle, along with a novel she wrote while temping at a bank, helped lead to her acceptance at Columbia University, where she would earn an MFA in Fiction: Creative Writing. The idea to form Pen Parentis first began in the late 2000’s, and it would become a federally recognized non-profit in 2014. Her leadership in that organization’s founding was also aided by her time as an undergrad.

“Anytime there was something lacking on campus, I would just start it,” De Voe said. “Because it’s a small campus where everyone knows each other, it was so easy to initiate something. With that background, any potential challenges of forming Pen Parentis never crossed my mind. I just went for it.”