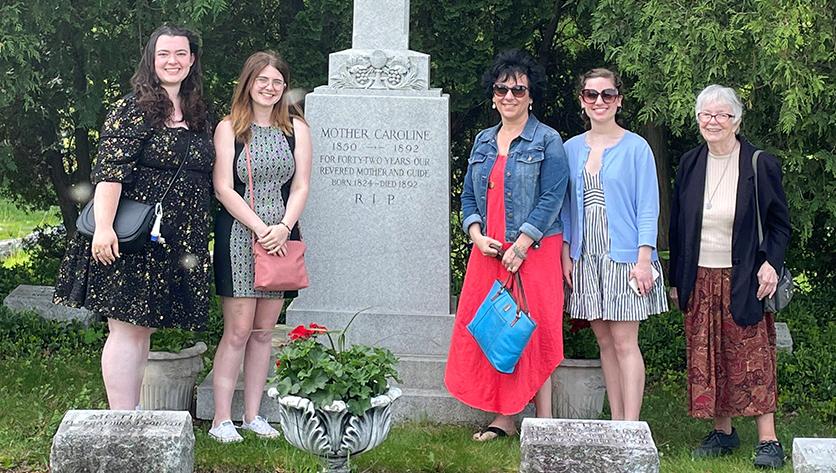 The Heritage Tour group at Mother Caroline's grave in Milwaukee

BALTIMORE – Two Notre Dame of Maryland University students had the unique opportunity to retrace the steps of some of the first School Sisters of Notre Dame to visit the United States during a week-long trip which included stops in several major cities.

Kristina Pickering ’22 and Jensen Armstrong ’24, both members of the Morrissy Honors Program, were joined by program director Dr. Evelyn Spratt and Sister Therese Marie Dougherty, Ph.D. ’60, on the SSND Heritage Tour. The trip, which took place from May 23-30, included stops in New York City, Rochester, Niagara Falls, Chicago and Milwaukee.

Following in the footsteps of a journey made by Blessed Theresa Gerhardinger, founder of the SSND, and Mother Caroline Friess, the group read relevant selections from their memoirs and letters and visited current SSND ministries throughout the trip.

“My top experiences were meeting the School Sisters of Notre Dame and their associates,” Armstrong said. “They were all incredibly welcoming and knowledgeable, making the trip very personal and fun. It was wonderful to sit down and share a meal together from the SSND's favorite restaurant and hear about the history of the organization and their current work. There is also never a dull moment with the School Sisters, they definitely kept us on our toes and gave us an amazing experience.

“I would like to thank Dr. Spratt and Sister Therese for organizing this trip,” she added. “They did an amazing job. Everything went so smoothly and their excitement and passion made the trip worthwhile!”

After reading about the sisters’ trans-Atlantic voyage to the United States in 1847 and their disappointing initial experience in St. Mary’s, Pa., the students began the Heritage Tour with a visit to the SSND Educational Center in Woodhaven, N.Y.

While there, the group received an introduction to GED and English as a second language programs offered at the center by Sister Cathy Feeney and her staff, and Sister Beatriz Martinez shared her experiences as a SSND NGO representative at the United Nations. The following day included a ferry trip to Ellis Island and a tour of the UN complex. 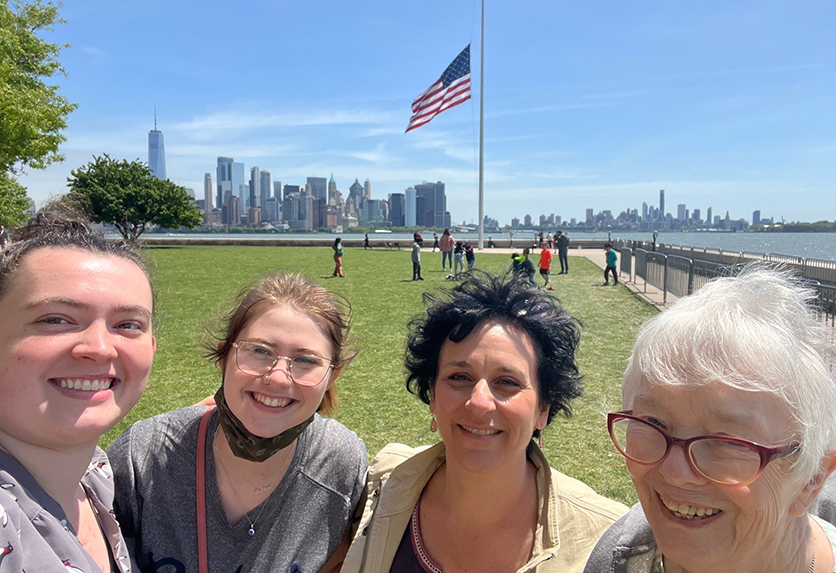 Next up was a train to Rochester, where Sister Evelyn Breslin and a friend took the group to the remaining façade of St. Joseph’s Church, the SSND’s first foundation in the city which is now a historical monument. They then drove to the nearby Notre Dame Learning Center to meet with a group of children and their tutors before having dinner at a waterfall where Blessed Theresa described Rochester as the most beautiful city in America. 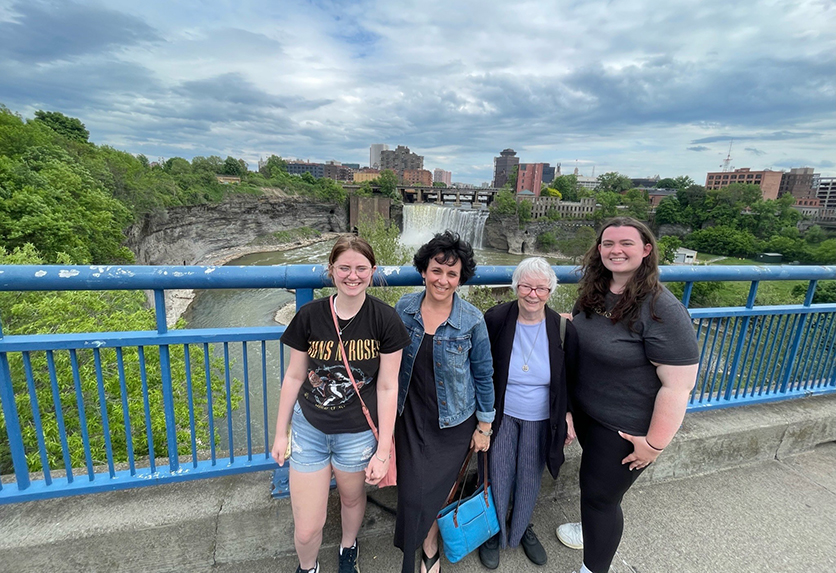 The tour continued in Niagara Falls, a favorite of Mother Caroline, and Buffalo prior to an early-morning flight to Chicago, where the group met Margarita Silva, SSND Associate and ESL director at Corazón a Corazón. They also had an opportunity to dine with Sister Catherine Sarther, a former professor in the School of Education at NDMU, during their time in Chicago. 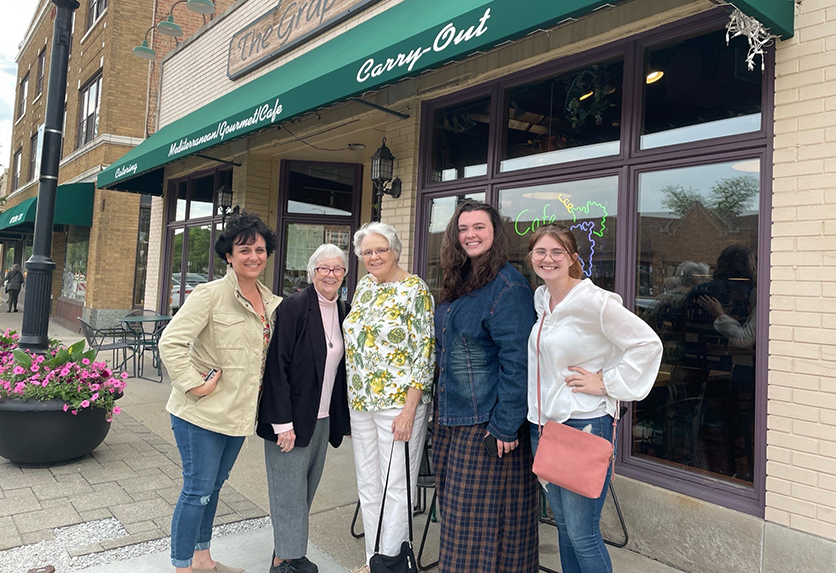 The final leg of the trip was spent at Mount Mary University in Milwaukee. SSND Archivist Michele Levandoski took the group to the Cemetery at Elm Grove to see the graves of Mother Caroline, her longtime friend and spiritual director Father Abbelin, and several other SSNDs. After paying their respects, they examined several items which belonged to Mother Caroline at the University Archives and listened to a presentation from Sister Joan Penzenstadler on the history of both Mount Mary and the SSNDs origins in Milwaukee. 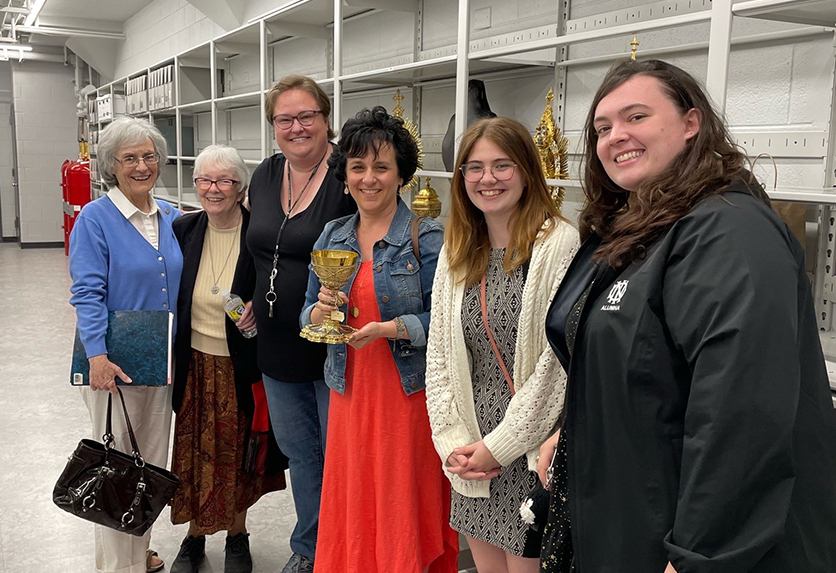 “One thing I was truly in shock of every time I saw a new SSND location, or met a different Sister or Associate, was the fact that the SSNDs have such a long and powerful history that we may not always have the chance to explore unless we see it for ourselves,” Pickering said. “These are women who see the needs of communities and act on them. There is a UN Representative, women who help to teach other women who have never had an education before, start food drives, create plushies for children across the border, and so much more. They are a family, and they welcome everyone and anyone into their family.

“I honestly miss all the people I have met not only for who they are but for what each of them stand for,” she concluded. “It makes me proud to say that I am a student of the SSNDs education and values. They helped make me who I am, and I hope that others can see the amazing work they do.”


Learn more about the trip in the words of Armstrong and Pickering below:


What inspired you to go on the SSND Heritage Tour with Dr. Spratt and Sister Therese?

Armstrong: “I was inspired to go on the trip with Dr. Spratt and Sister Therese because I love history, and I was excited to have a hands-on learning experience about the School Sisters of Notre Dame. I am also interested in becoming an archivist, so when Dr. Spratt told me we would be visiting the archives I was thrilled.”

Pickering: “I wanted to round out my SSND education. When I was younger, I attended Our Lady of Hope St. Luke School in Dundalk, which was and still is run by a SSND (Sister Irene). I then attended the Institute of Notre Dame for my high school education, which was founded by the SSNDs and still had a few sisters teaching there, such as Sister Kathy, before it shut down. And now I have finished my college years at another SSND-founded school, Notre Dame of Maryland University, where I had the chance to be taught by Sister Therese. All in all, I grew up with the values and history of the SSNDs, it has become a part of who I am, and this trip allowed me the opportunity to see “live history” or retrace the steps of the SSNDs and see how times have changed. And from that I have realized that you can talk about history, but being able to retrace the steps of the SSNDs is not something you get to do every day!”

What were some of your top experiences on the trip? What was it that made those experiences memorable?

Pickering: “My memorable experiences always involved meeting the SSNDs (whether Sister or Associate). As I mentioned before, I grew up being taught by the SSNDs in my grade school, high school, and college life. I have always enjoyed getting to know the SSNDs in the state of Maryland; however, getting to see other SSNDs and their work was truly inspiring! Every time I had the opportunity to meet a new Sister or Associate, I saw how each one of them took their passions and made something amazing and life-changing for their community. Seeing their passion (and hearing their humor) were my favorite parts because you don't get to read that in a book; some things you need to see in person.”

How did this trip increase your knowledge of not just the history of the School Sisters of Notre Dame, but also the initiatives that they continue to work on in the present day?

Armstrong: “The trip increased my knowledge of the SSNDs through the letters that we read from Mother Caroline and everyone that we met along the way. They all had their own aspects of the SSND history prepared, a history of their specific mission in that area, and it was all tied together at the archives. We also saw firsthand how the SSNDs carry on their mission of educating women today. They have GED programs, English as a Second Language, and tutoring for young children. However, these are more than just programs. The SSNDs create a personal learning environment and sense of community that fosters support and confidence, which is truly necessary in order to have a successful education. The SSNDs bring an incredible amount of dedication, passion, and perseverance to what they do and it is truly inspiring.”