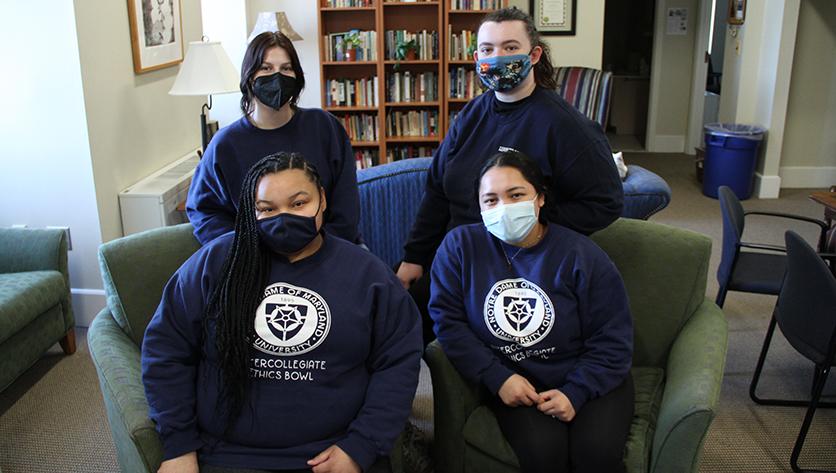 BALTIMORE – Four seniors represented Notre Dame of Maryland University on the national stage over the weekend, as they competed virtually along with 35 other schools in the Association for Practical and Professional Ethics (APPE) Intercollegiate Ethics Bowl.

Kristina Pickering ’22, Raquel Pompey ’22, Kylie Simonson ’22 and Cecia Zavala Ramos ’22 clinched NDMU’s first appearance in the competition after posting a top-three finish at regionals back in November. Facing some of the country’s top collegiate teams on Saturday and Sunday, they placed 13th overall after completing their four matches with two victories, one tie and one defeat, with the lone setback coming to a team from the University of Oklahoma which ultimately advanced to the quarterfinals.

“I was incredibly impressed with how they performed,” said Dr. Jessica Davis, assistant professor in NDMU’s Philosophy Department and the team’s coach. “They stayed so humble throughout the process and worked as hard as they could. The results from this weekend proved that they deserved to be there.”

All 36 teams took part in four preliminary round matches, with the top eight moving on to the quarterfinals. In the weeks leading up to the Ethics Bowl, teams were given background information on 17 potential cases, and in each match they were questioned by a moderator on one of those 17 cases.

“When I first joined, I thought it would be like a debate where you are arguing with the opposing side about something,” Zavala Ramos said. “But that’s not what it’s like at all. It’s more of a discussion, where you formulate a position on a topic that can be controversial and you pose it to the other group. They listen to you and respond with questions, rather than trying to break down your argument.”

Notre Dame began the weekend with a victory over Weber State University after presenting on a case discussing the ethics of gene editing. Their second win came against Oakland University on Sunday, and the weekend concluded with a tie versus a Salisbury team which previously bested NDMU back at regionals.

“In the victory over Oakland, we presented on a difficult case related to cryptocurrency, which is a topic that for most of us is way over our heads,” Dr. Davis said. “Cecia did the research for that case and really carried us in that round. Her team members gave her their full support before the round started, it was a remarkable moment of team solidarity.”

The 17 potential cases were first made available by the APPE in December, giving teams several weeks to conduct research and formulate opinions in the weeks leading up to the competition.

“Anything is possible,” Pickering said. “We don’t know the questions ahead of time, we don’t know what case we’ll be given, but we prepare for all of them. Coming from different backgrounds, each one of us has our own take on the cases. Putting it all together into one argument and being ready for every possible question takes a lot of work, but it’s also really rewarding at the end.”

All four NDMU seniors were first-time participants, and next year will bring an opportunity for others to compete for a spot at nationals.

“I’m really excited to continue the Ethics Bowl here on campus,” Dr. Davis said. “I’ll be teaching it again in the fall and fielding another team of students to compete.”