Baltimore, MD – Notre Dame of Maryland University (NDMU) is proud to welcome award-winning journalist Soledad O’Brien to its line up for the Women of the World Festival – Baltimore (WOW), the region’s largest women’s festival, March 7, 2020 at the Columbus Center in Downtown Baltimore.

“NDMU has partnered with WOW to create an inclusive, sharing and learning environment,” says NDMU President Marylou Yam. “There is great synergy when two organizations with similar missions come together. We are proud to be part of this powerful movement to continue to advance the global landscape for women.”

WOW Festival Baltimore, first presented by NDMU in 2016, celebrates the power of women and girls in the Baltimore region and around the world. The unique festival creates numerous pathways for participants to take part in WOW projects, amplify their own causes, or start new initiatives that have a wide impact on communities. It is, internationally, the biggest, most comprehensive and most significant festival dedicated to presenting work by women and promoting equality for women and girls.

The WOW Festival was founded by Jude Kelly in the UK in 2010 to honor women and girls and help raise awareness globally of the issues they face and discussing solutions together. To date, the WOW Festivals have reached over two million people in 17 countries on five continents across over 65 festivals – and growing – including in Australia, Brazil, China, Finland, Nepal, Nigeria, Pakistan, Sri Lanka, Somaliland, the UK, and the USA.

“WOW celebrates women and girls and takes a frank look at what’s stopping them from achieving their potential,” says WOW Foundation Founder Jude Kelly. “WOW is the biggest movement of women and girls across the globe, and it’s so important that Baltimore is part of this story for change.”

WOW Festival Baltimore will inspire, engage, and energize women and men in the Baltimore region by providing diverse forums for discussion and action and advance positive transformation for Baltimore and beyond. The festival aims to unite and explore a variety of issues that affect women and girls across cultural and social boundaries.

“We are thrilled to present WOW Baltimore in 2020, the Year of the Woman as declared by Governor Hogan, the centennial celebration of women’s suffrage, and the 10th anniversary of the founding of the initial WOW Festival by Jude Kelly in London” says shared Maricka Oglesby, WOW Baltimore Producer, and Director of the Women’s Leadership Institute of Notre Dame of Maryland. “NDMU is ecstatic to present this event to inspire, energize and mobilize girls, women, boys, and men to move towards a world that affirms equity in all aspects.”

The WOW Festival will feature artists, writers, politicians, performers and activists to promote inclusivity, honor the strength and the inventiveness of women, and actively break down societal barriers through events, workshops, lectures, debates, activities, and performances.

This year’s festival will have several new features including the Stanley Black & Decker Makerspace, and an opening session celebrating the commemoration of women’s suffrage in partnership with the Maryland Women Suffrage Centennial Commission chaired by retired Major General Linda Singh.

WOW Festival Baltimore presenters include Soledad O’Brien, an award winning journalist and global influencer; Cyntoia Brown , an advocate for criminal justice reform, and author of Free Cyntoia: My Search for Redemption in the American Prison System; Amber Tamblyn, actress, social justice activist and author of Era of Ignition: Coming of Age in a time of Rage Revolution and more.

2020 is a milestone year for NDMU as well as it celebrates its 125th Anniversary. NDMU was founded in 1895 under the bold vision of the School Sisters of Notre Dame, as the College of Notre Dame of Maryland, which was the first Catholic college for women to award the baccalaureate degree.

Tickets are $40 per person and student discounts are available. Tickets can be purchased at www.wow-baltimore.org. The festival is sponsored by Maryland’s Commission on the Commemoration of the 100th Anniversary of the Passage of the 19th Amendment to the United States Constitution. 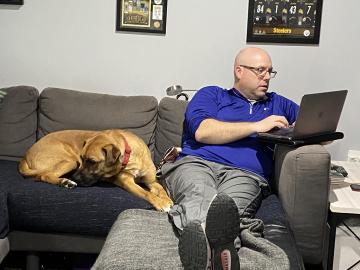 Working From Home, Online Learning and Managing Digital Distractions During the Age of Coronavirus

Hi Ryan, working and learning from home 100% of the time is new concept for a lot of us, how is it going for you? Like most of the world, it takes a bit of getting used to working from home and...
March 18, 2020

Full text to President Yam’s campus message: During these unprecedented times of required responsiveness and the rapid development of the COVID-19 pandemic, NDMU has the responsibility to keep...
March 11, 2020

After the scheduled spring break next week, March 14-22, face-to-face classes will resume via remote instruction through at least April 5, with the exception of programmatic clinical, practicums, and...
View all news